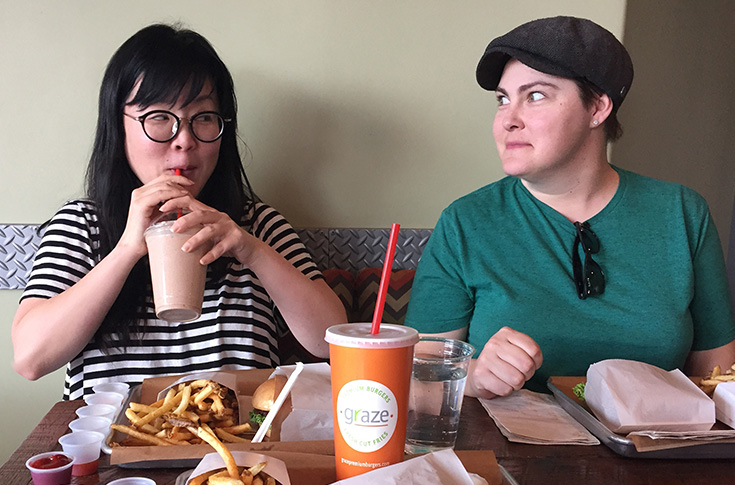 Shannon is a co-founder and the “industry brain” at Actors Compass. With 20+ years of experience in the acting industry and 10+ years as a web developer, she has built, reviewed, and consulted on hundreds of actor sites. The idea for Actors Compass grew out of a business workshop Shannon teaches to graduating acting students at various schools and theaters. A few weeks ago, Helen, also a co-founder and the “all-up-in-your-business brain”, sat down with Shannon to discuss all things Actors Compass.

Helen: I know acting was your main focus for a very long time, after which you segued into web developing by making actor websites for friends. How did you come to co-create Actors Compass?

Shannon: I always thought that there needed to be a way for new actors to get that leg up — new actors who don’t have thousands of dollars that more established actors have to build out a fully-fledged, branded website. I was seeing actors make terrible websites using free website builders with 200 headshots of them in different-colored t-shirts. It’s not that free website builders are inherently bad but, without any guidelines, actors were kind of running amok with their materials. They were putting up every resume credit they had, going all the way back to grade school plays. Um, no, that play that you were in when you were eight is not going to help you book a pilot.

Prior to the genesis of Actors Compass, I’d acquired an in-depth breadth of experience in and around the business of acting. On top of acting in both New York and LA, I got to see the other side of the industry by directing a little bit and working at an LA talent agency. I saw what it’s like to be on the receiving end of submissions from actors, and the agency had me working on websites for clients who were more established actors. These experienced, working actors had really specific headshots and really specific materials that they were presenting to the world, and it was easy to see the through line created by people who understood their niche.

H: I can see how working in that environment got your juices flowing about what ultimately became Actors Compass.

S: Yeah, working at the talent agency, I realized that agents and producers spend about five seconds looking at your site, especially if you’re an actor just starting out. So you don’t want to waste their time. You need to get your best headshot, get the best 30 seconds of your reel, get your five best credits in front of them as soon as possible. They will appreciate it. They will not say, “I’m so sad that this actor didn’t take time to add curly-cue designs to the background of their website!”

H: For you, then, creating Actors Compass was a way to provide structure and guidance for new actors who haven’t quite figured out how to present themselves yet.

S: Absolutely. What you’re referring to is branding, and that’s the actor’s job. They have to figure out what parts they’re best suited for. They have to figure out how to create the right headshots and put their best reel forward that represents their brand. Actors Compass steps in to provide the structure by saying, “Hey, you really only need a 90-second to two-minute reel. You really only need one strong headshot right now.”

Actors Compass is basically your online one-sheet. (Don’t know what a one-sheet is?) It takes out all the decision-making about what to put on your site. With other free website builders, there’s a lot of leeway in terms of design and different backgrounds and this and that. There’s a time when all of that is helpful but when you’re just trying to get in the door, you need to have laser focus on putting your best materials up front. Actors Compass makes it really easy for both you and the casting person looking at your stuff.

H: When I think of “branding” I think of a specific design or look. You can customize an Actors Compass site a bit but there isn’t room for flair. Can you explain that?

S: Knowing your brand doesn’t mean you need an over-designed website. It means that your brand shows through your work — it shows through your headshots, the parts you actually get cast in, your reel clips and credits. An over-designed website often means you’re trying to “force” a brand on yourself that you don’t embody. Actors sometimes have a hard time learning that “less is more” when they’re presenting their professional package.

H: You’re sharing such good stuff. I’m surprised that there aren’t website-related resources out there for young actors to turn to so they’re not putting curly-cue designs or 200 variations of the same headshot on their website.

S: I know, it’s odd. There’s advice for actors who have an established career and money for targeted photo shoots but not for people starting out, other than, “Sign with an agent or a manager.” If you do find the right rep to sign with, they immediately say, “Get a website,” but they don’t tell you how because they’re not allowed to tell you who to go to. If they do, they’re being shady, FYI. Reputable agents CAN give you suggestions and tell you what they wanna see on your website but they’re still the agent. They’re not the casting director or producer who’s looking at a hundred people who look just like you. So their suggestions may be limited to their experience.

H: Nowadays, it’s so easy to set up a profile on LA Casting, Backstage, Actors Access, etc. Couldn’t I just use those as my online portfolio?

S: It’s definitely good to have a presence in all those places for sure. But Actors Compass isn’t just a resume service. When you sign up and create an Actor Compass website, it’s your actual website. Plus, Actors Compass isn’t tied to any other service so you don’t need to have a subscription to create or look at an actor’s profile.

If you go see any live theater and look at the actors’ bios, most of them will include a web link for further information. It’s all about getting known so it’s all about getting your information in front of people. If the link was to your Actors Compass website, they would immediately see all the essentials of you as a professional actor and not be bombarded by ads or scroll through your feed on those other sites you mentioned.

H: Ok, say I’m a brand new actor. I’m sold on everything you just said and I put together my Actors Compass site. What’s my next step?

S: One: you put it on your resume. Two: you link to it from all of your online profiles. Three: you put it in your email signature so that every time you’re sending a submission, they see a link to your best work. That’s just a single click for the people who are thinking about whether or not they’re going to give you an audition. Your Actor Compass website is your business card. It’s your calling card to get you in the room. You want them to see all of your material in one place quickly, and that will make them want to see more. It’s a teaser in that way.

H: Couldn’t I just attach or embed my reel, headshot, and resume — or link to something like Backstage — into the email without bothering with Actors Compass?

S: Yeah, but are they going to click on or open all of that? Are they looking on their phone and unable to open that Word doc? You want it all to be as easy as possible for them. Also, it’s so much work for you as an actor to have to do that every time. Wouldn’t it be great if you could just have a set package that’s easy to send and super easy to update? Actors Compass makes it a one-click option for both you and them.

H: And what if I have more to show than my “online one-sheet,” like you said earlier? What do I do with additional materials?

S: For the moment, you hold back. Get in the room, first of all, and start booking stuff. And continue to build your materials. When I was working on websites for that talent agency I mentioned, I saw that when someone’s a bona fide working actor or at a celebrity level, their recognizability buys them the additional time and space to show all sides of them. When you’re starting out, though, those five seconds that a casting director spends looking at your material are critical. After that, they’re already moving on to the next actor vying for their attention.

H: So that’s what I need to do for now. In the future, how can I expand my Actors Compass website when I reach the level of a more experienced actor?

S: We currently have the free version of Actors Compass available. We’re moving toward the next version which will be the pro tier. It will give you the ability to have more headshots, reels, and credits on your site. By the time that’s available, you’ve ideally been building your credits and honing in on your branding, like, “Oh, ok, I always book bad boy roles. Let’s capitalize on that. Let’s move to the pro level of Actors Compass and put all my bad boy headshots in one gallery so that it’s easy for people to see the exact looks I can offer for the part they’re casting.” We also have plans in the future to create a kind of one-stop casting directory of Actors Compass users searchable by casting professionals.

H: Cool! In the meantime, while I’m still at the starting phase, do you have other ideas of how to use my current Actors Compass website for self-promotion?

S: Beyond the virtual calling card, I would consider making a QR code of the link to your site and put that on your physical business card. Then people can scan your card with their phone and immediately take a look at your reel. It’s an added bonus that the reel is also packaged with your resume and your credits, and they won’t have to wade through your entire YouTube channel to find the thing you wanna showcase. It’s really about integrating all of your collateral material into one clean package while you’re getting started.

Read Part 2 of my interview with Shannon.

Stay in the Loop